FINANCIAL RESULTS OF THE AGORA GROUP IN THE 2Q2022 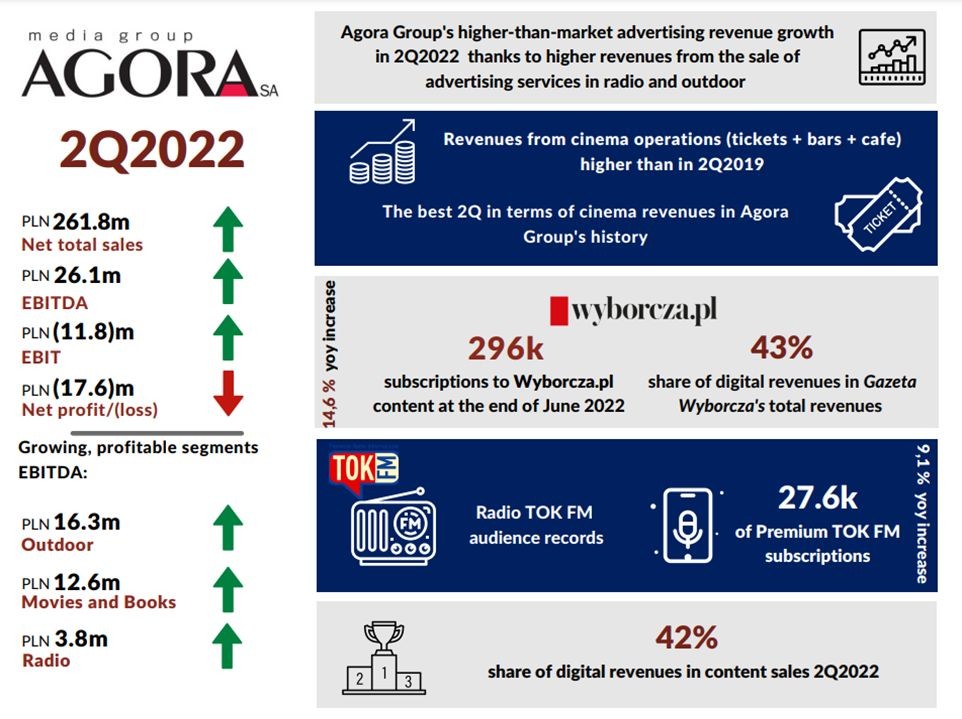 The Agora Group closed the 2Q2022 with a significant improvement in operating results ensured by 1/3 higher yoy revenues recorded in almost all businesses. For the cinema activity, which was intensively recovering from the pandemic, it was the best quarter in terms of revenues in the company's history. Agora Group's advertising sales grew faster than market expenditure on promotion of products and services, especially in the Outdoor and the Radio segments, which outgrew the market dynamics.

- Over the past few months, we have made good use of the absence of business restrictions to work on recovery of the Agora Group's results. Helios' revenues returned to pre-pandemic levels, and our advertising sales, the Group's largest source of revenue, grew faster than the market for another consecutive quarter. We are also constantly increasing revenues from e-commerce, especially from content subscription - says Bartosz Hojka, President of the Management Board of Agora. - Challenges for the coming months will be the deteriorating economic situation and the rapid rise in costs, as well as – hopefully not - another wave of pandemic. Our priority remains to face them as effectively as possible and continue rebuilding our financial results.

In 2Q2022, the Agora Group's total revenues amounted to PLN 261.8 million, growing up nearly by 30% yoy. Thanks to the gradual lifting of pandemic restrictions and the activation of more industries, most of the Group's revenue categories increased, especially the revenue from cinema business, recorded due to the restoration of attendance and the absence of restrictions in its day to day operations. As a result, revenues from ticket sales in cinemas of the Helios network increased to almost PLN 40.0 million, that is by almost 140% yoy, and from concession sales were more than four times higher, reaching PLN 23.0 million. Importantly, the cinema revenues defined in this way were higher not only in relation to 2Q2021, but also to 2Q2019. In the period under review, nearly 2.1 million tickets were sold in Helios cinemas - over 132% more than a year ago and only 1.5% less than three years ago. The total number of tickets sold in Polish cinemas between April and June 2022 was nearly 9 million, an increase of more than 150% compared to the same period in 20211. It should be remembered, however, that cinemas in 2021 were closed by administrative decision until 20 May, and thereafter operated with a limit on seats available for sales2.

Advertising revenue in the Agora Group increased by almost 10% in 2Q2022 to PLN 129.7 million, growing in most business segments. This was due to the return of many enterprises to advertising activity, which resulted in a 4.5%3 yoy increase in the total value of advertising spending in Poland in the period under review. What is important, the level of these revenues in the Group recorded two times higher growth dynamics than the market. The segment in which advertising sales increased the most - by almost 47% and which contributed most strongly to the growth of this category in the Group's total account - was Outdoor. There were also significantly higher advertising revenues in cinema and radio operations, as well as - slightly - in the Press segment. It is also worth noting that this revenue category in the Outdoor and the Radio segments grew faster than the market. Only Agora's Internet recorded lower advertising inflows, mainly due to their decline at Yieldbird, which is changing its business profile and developing new products for clients. Digital and internet revenues accounted for almost 40% of Agora Group's total advertising sales, i.e. less than a year ago - mainly due to a significant increase in advertising proceeds from campaigns on outdoor panels and in cinemas.

The Agora Group's revenues from its food service and film operations increased by more than half in the period under review. In the case of the former, this had to do with higher revenues from Step Inside company, which is already successfully developing 12 locations under the Pasibus brand, in the absence of restrictions in day to day operations of restaurants, while in the case of the latter, it was linked to the ability to bring new productions to the big screens after last year's cinema closures and an increase in attendance. Interestingly, NEXT FILM, the film production and distribution company of the Helios group, also recorded further successes of its titles made available in other channels of distribution - the film Za duży na bajki (Too Big for Fairy Tales) directed by Kristoffer Rus, NEXT FILM's March release, was in the TOP10 most-watched propositions of the Netflix platform in 38 countries in July 2022. The Agora Group also reported an increase in revenue from other sales, primarily due to higher income from its printing business.

The only revenue item with a decrease in value in 2Q2022 was copy sales, which declined by almost 7%. This was affected by lower inflows of Agora Publishing House and from Gazeta Wyborcza sales, although revenues from digital subscriptions of the daily increased by more than 10%. The number of active subscriptions to Wyborcza.pl content at the end of June 2022 reached nearly 296,000 - almost 15% more than last year. The share of digital revenues in total sales of the Group's publications amounted to 41%, growing by more than 10pp. Moreover, it is worth noting that in addition to the sales of publications, the Agora Group also offers other content in digital form, such as podcasts, and the overall digital content sales are growing dynamically - its share grew to nearly 42% in April-June 2022. The number of Premium TOK FM subscriptions sold at the end of the 1H2022 amounted to 27,600, up more than 9% yoy.

The Agora Group's net operating expenses increased by more than 19% to PLN 273.6 million in 2Q2022. This was mainly attributable to higher operating expenses in the Movies and Books segment, linked, among other things, to the growth of revenues. Costs were also higher in the Group's other business areas apart from the Internet. The largest category were staff costs, which grew yoy by just under 20%. This resulted from an increase in headcount in all businesses - at the end of June 2022, it stood at 2,375 FTEs, 88 FTEs higher than in 2021, as well as from salary increases and other employee benefit measures taken by Agora's Management Board. The Group also recorded cost increases in other cost categories besides depreciation and amortization, due to the greater scale of operations of its businesses compared to the same period of 2021.

Thanks to the intensive work on revenue growth, mainly from cinema operations and advertising, in 2Q2022, Agora Group improved its operating results - it achieved an EBITDA profit of PLN 26.1 million and reduced its EBIT loss to PLN 11.8 million. The Group's net loss amounted to PLN 17.6 million, and the net loss attributable to shareholders of the parent company was PLN 16.0 million4.

In April-June 2022, the value of advertising spending in Poland increased by 4.5% compared to 2Q 2021. This value was also higher compared to 2Q2019 by more than 7%. Despite this, after analyzing the available data and observing market trends, Agora decided to keep its estimates of the dynamics of advertising spending in Poland in 2022 unchanged – approximately 3.0-6.0%, due to high uncertainty about the scale of the possible economic slowdown in the country in the coming periods. Only in the case of outdoor advertising and cinemas, the company decided to raise its expectations as to the annual growth rate of the value of advertising expenditure in these media due to the significantly faster than estimated dynamics of their restoration in the 1H2022. Previous estimates assumed an increase in spending on campaigns carried out on outdoor advertising panels in the range between 15.0% and 18.0% - currently the company estimates that in 2022 it may be at the level of 20.0-25.0 %. This growth will be additionally supported by sporting events taking place in the 2H2022, which traditionally result in greater activity of advertisers in outdoor advertising. For cinema advertising, the estimates assumed an increase in expenses in the range between 75.0% and 85.0%. However, the company estimates that in 2022 they may increase by 80.0-90.0%, as long as the cinemas continue to operate normally in the 2H2022.

For the company's Management Board, the key project for 2022 remains guiding the Group safely through the period of economic downturn and working on the development strategy for the entire Agora Group for 2023 - 2027. An analysis of the organization's development potential, its business portfolio and market environment is underway and is expected to be finalized later this year.

Data source: consolidated financial statements for 2Q2022 and 1H2022 according to IFRS.

1 Cinema attendance: Helios S.A. estimates - from November 2019, the UIP distributor does not report attendance data on its films in Poland.

2 Cinema seating sales limits did not apply to the vaccinated persons.

3 Advertising market - Agora's estimates (press based on Kantar Media and Agora's monitoring, radio based on Kantar Media), IGRZ (outdoor advertising, since January 2014 the number of entities reporting revenues to IGRZ has decreased), as well as preliminary data from Publicis Media (TV, cinema, internet).

4 Without taking into account the impact of IFRS 16, in the 2Q2022, the Agora Group recorded an EBITDA profit of PLN 4.2 million and an EBIT loss of PLN 17.0 million.

Every day something new happens to us.
We will be happy to tell you about it.

Providing an e-mail address means you agree to receive a newsletter containing information about Agora S.A. and companies from the Agora capital group in the selected area. The administrator of your personal data is Agora S.A with its registered seat in Warsaw (00-732), 8/10 Czerska street. Your personal data will be processed in order to deliver the ordered newsletter, as well as for statistical and analytical purposes of the administrator. The consent may be withdrawn at any time by contacting iod@agora.pl, however its withdrawal does not affect the legality of the processing carried out prior to the withdrawal. By withdrawing the consent to receive the newsletter, you resign from receiving all corporate newsletters regarding the activities of Agora SA and companies from the Agora capital group. For more information on the processing of personal data, in particular your rights, see the Agora.pl privacy policy and our transparency policy.